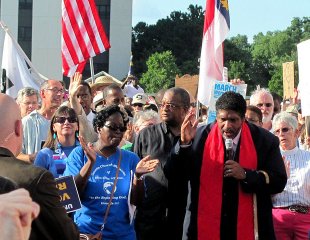 For several decades in the middle of the last century, millions of workers of all ethnicities woke up on Labor Day each year and headed for their local Labor Day march. Arm in arm they walked down the streets, singing songs of solidarity. It’s no accident that in those same years, income inequality was falling, not rising. The day in, day out preoccupation of people deeply concerned about promoting positive, progressive social change back then was building a strong workers’ movement. The organizers of that movement, however, never saw rising incomes as their goal, nor did they limit their understanding of a strong workers’ movement to the narrow conception of a good union contract. Quite the contrary, the organizers of our biggest Labor Day marches always understood the workers movement to be about more than a good union contract, and much more than today’s myopic goal of merely a good wage. A strong workers’ movement was understood to be the cornerstone of a much larger project: building a just society.

To Read the Full Article and Excerpt Click Here.