No Shortcuts
Organizing for Power in the New Gilded Age

In the spring 2018 new edition of No Shortcuts (August 2017), a softcover, I outline how Trump won, and, how to defeat the forces that put Trump into power.

Quoting from the new preface,

“Donald J. Trump attained power by decrying the elite, and turning the working class not against bosses and bankers but against one another. Of course, like democracy itself, unions are complicated and flawed. Yet we’ve found no better system for running a country than democracy and no better mechanism for ensuring decent lives for its working-class citizens than unions. It’s time we finally learned the two are inseparable. Without basic economic justice to underpin it, democracy cannot thrive—or survive.”

In NO SHORTCUTS: Organizing for Power in the New Gilded Age, Jane F. McAlevey investigates the reasons behind the recent failures of unions and lays out a way forward for the progressive movement. McAlevey, an experienced community, electoral, and labor organizer, presents a dozen case studies of unions and social movements seeking to effect change in the twenty-first century. As she analyzes each case, she identifies the reasons for the movement’s success or failure.

Jane McAlevey says, “For a long view on the evils of the corporate leadership of the meatpacking industry, Oxford made my chapter on the successful worker organizing campaign at the nation’s largest pork processing plant available to read for free online.”

Read the chapter about Smithfield Foods »

“For McAlevey, politics is not about getting the right frame to convince conservative voters; it’s not about mobilizing activists or liberals to lobby Congress or to fund issue groups; it’s not even, primarily, about holding huge marches of the already convinced. It’s about exercising power. The right is powerful because it’s advancing the agenda and funded by the rich, the ultra-rich and corporations. The left doesn’t have the resources to challenge the right on its own terms. What the left does have, McAlevey asserts, is the potential power inherent in the numbers and the economic leverage of the poor and oppressed.”
~Mike Wold, Real Change News

“No Shortcuts: Organizing for Power in the New Gilded Age, by Jane McAlevey, argues that all organizers have something to learn from labor. A study of successful strike campaigns since 2000, the book makes the case that mass participation is the key to winning broad democratic reform. Though not a book about feminism, it has implications for feminists and working women generally.”
~Dayna Tortorici, Harpers

“Imagine if you didn’t know how to play basketball, and all anyone told you was “pick and roll!” For someone new to political work, this is what the calls to “get organized” can sometimes feel like. Thankfully, in the most nitty-gritty book here, veteran labor and community organizer Jane McAlevey provides a series of case studies that detail exactly what successful organizers do.”
~Charlie Heller, Paste

“Jane McAlevey is a deeply experienced, uncommonly reflective organizer. In NO SHORTCUTS, McAlevey stresses the distinction between mobilizing and organizing and examines how systematic conflation of the two has reflected and reinforced the labor movement’s decline over recent decades. More than a how-to manual for organizers, NO SHORTCUTS is a serious, grounded rumination on building working-class power. It is a must read for everyone concerned with social justice in the US.”
~Adolph Reed, Jr., Professor of Political Science, University of Pennsylvania

“McAlevey’s decades as a labor and community organizer means that she knows what organizers do, or should do. This book lifts the lessons McAlevey takes from that craft into the intellectual realm of power and politics. This book is for anyone who wants a democratic society in which ordinary people share power.”
~Frances Fox Piven, author of Challenging Authority: How Ordinary People Change America

“Whether it is Black Lives Matter, climate change, feeling the Bern, or worker rights, success hinges on the ability to build real and sustainable power. Jane McAlevey gives us both a practical guide and a set of underlying principles to understand how organizing matters more than any other available strategy to grow power, and, what it means to organize. A must read for anyone hoping to create a better world.”
~Dan Clawson, Professor of Sociology, University of Massachusetts at Amherst

“Jane McAlevey is one of the few analysts of social movements today who takes class power and class struggle seriously. McAlevey understands their ineluctable concreteness and force from years of organizing democratic unions that have effectively battled powerful corporations. This is a book for citizens and activists–but also for students and scholars of social movements–who want to understand how the world can and has been changed for the better.”
~Jeff Goodwin, Professor of Sociology, New York University

A German version of No Shortcuts is available here. 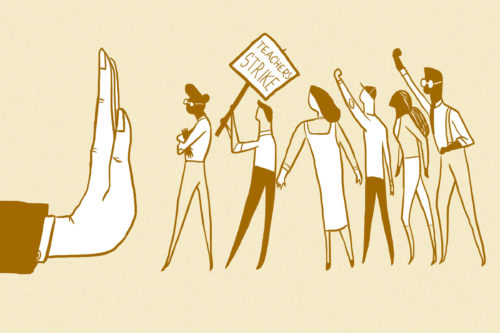 Now It’s North Carolina Teachers’ Turn: How Did We Get Here? What's Next?