A Collective Bargain: Unions, Organizing, and the Fight for Democracy
For decades, intractable social and economic problems have been eating away at the social and political fabric of the United States. There is a single, obvious weapon whose effectiveness has been proven repeatedly throughout US history: unions.

Praise For A Collective Bargain

“McAlevey is an incredible thinker and practitioner of how you actually organize people.”
– Ezra Klein, cofounder of VOX

“Jane McAlevey has devoted her life to reigning the destructive power of concentrated wealth and she is consumed with one over-arching question: How do we win? In this essential book, she draws on decades of organizing experience to make an overwhelming case that the new face of working-class power is female and fiercely feminist. It’s past time to listen up.” – Naomi Klein, author of This Changes Everything

“Read this book! It’s full of effective strategies for overcoming voter suppression against even the stiffest odds. Jane McAlevey is the type of experienced organizer the current White House fears.”
– Benjamin Todd Jealous, Former National President and CEO of the NAACP

“A half century ago, the Koch family targeted workers’ collective power with so-called right-to-work laws. Now they and their allies have expanded their agenda to shackling democracy writ large… McAlevey shows us how workplaces provided a laboratory for this audacious project of domination—and better still, she explains how following the strategies and tactics of savvy union organizers could help save America from an ever more ruthless right… This empowering book could not be more timely.”
– Nancy MacLean, author of Democracy in Chains: The Deep History of the Radical Right’s Stealth Plan for America

“An introduction to the world of unions and their enemies… McAlevey’s writing is an attempt to circulate organizer’s skills, breathing life into the long-quiescent labor movement… A Collective Bargain, like all of McAlevey’s work, is indispensable.”
– Alex Press, Bookforum

“Jane McAlevey is a brilliant strategist, rousing organizer, and razor-sharp critic inside the labor movement. In this critical moment when labor is resurgent, McAlevey’s small “d” democratic spirit, and her humane, and deeply informed reporting and analysis is needed more than ever.”
– Katrina vanden Heuval, Editorial Director & Publisher, The Nation

“McAlevey’s work taps into something that many of us have felt and known to be true: the unshakeable force of solidarity, and the fears we must face in order to claim this power… Her latest book argues that systematic grassroots organizing is the key to repairing today’s ravaged democracy.”
– Eleni Schirmer, The New Yorker

“Labor activist McAlevey delivers a persuasive argument that the power of ‘strong, democratic’ trade unions can fix many of America’s social problems in this timely cri de coeur. . .  She offers a useful primer on how labor organizing works, and effectively refutes common assumptions about unions. . .  McAlevey’s . . .  humor and contagious confidence in the efficacy of organized labor give this succinct volume an outsize impact.”
– Publishers Weekly (starred review)

“Incisive, brilliant, combined with trenchant strategic analysis. If we had more organizers like Jane McAlevey, we’d be winning.”
– Van Jones, CNN host and author of Beyond the Messy Truth

For decades, intractable social and economic problems have been eating away at the social and political fabric of the United States. There is a single, obvious weapon whose effectiveness has been proven repeatedly throughout US history: unions.

In A Collective Bargain, longtime labor, environmental, and political organizer Jane McAlevey makes the case that unions are the only institution capable of fighting back against today’s super-rich corporate class. Since the 1930s, when unions briefly flourished under New Deal protections, corporations have waged a stealthy and ruthless war against the labor movement. And every decrease in the numbers and power of organized labor has enabled an increase in inequality and injustice.

Alongside McAlevey, we travel from Pennsylvania hospitals, where we’re thrust into a herculean fight in which nurses are building a new kind of patient-centered unionism; to Silicon Valley, where tech workers, fed up with the illusory promise of a better world, have turned to old-fashioned collective action; and inside the most promising anti-austerity rebellion in years, the one being waged by America’s teachers.

Read reviews of A Collective Bargain »

Read an excerpt » How Unions Can Still Win Big

Read an excerpt » Why Unions Matter

A German version is available here. 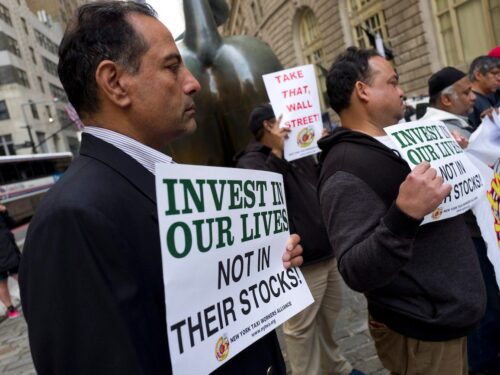