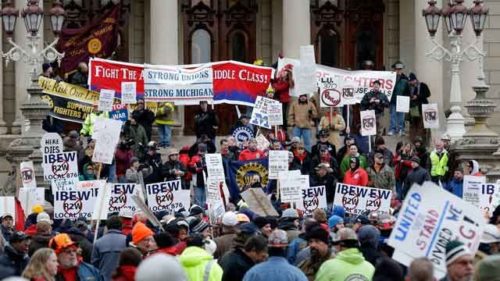 On December 14th, just after Michigan voted to go right-to-work-for-less, I sat down with CounterSpin at FAIR.org. Click here to listen online. Read More

Today, fewer than 7 percent of American private-sector workers belong to a union, the lowest percentage since the beginning of the 20th century. Union organizer Jane McAlevey looks at the state of the American labor movement and describes her experiences fighting the bosses and national labor leaders. In Raising Expectations (and Raising Hell): My Decade Fighting for the Labor Movement, she tells the story of a number of dramatic organizing and contract victories, and the unconventional strategies that helped achieve them, and looks at ways to revive the labor movement. Read More

Interview: What Are The Most Effective Ways For Workers To Organize? on KALW

I talk to Rose Aguilar on Your Call from San Francisco public radio KALW. Listen on the KALW website. On today’s Your Call, we’ll have a conversation with Jane McAlevey author of “Raising Expectations (and Raising Hell): My Decade Fighting for the Labor Movement.” She argues that labor can be revived, but only if the movement acknowledges its mistakes and fully commits to deep organizing, militancy, and an approach to workers and their communities that more resembles the campaigns of the 1930s. Read More

Talking Book One with Laura Flanders (2 minute clip): A late 2012 Clip Which Previews the 2016 Disaster