The Union Membership Rate Has Dropped to a Historic Low. It Doesn't Have to Be This Way.
A new report offers a grim look at that the state of labor nationally, but that’s not the whole picture. 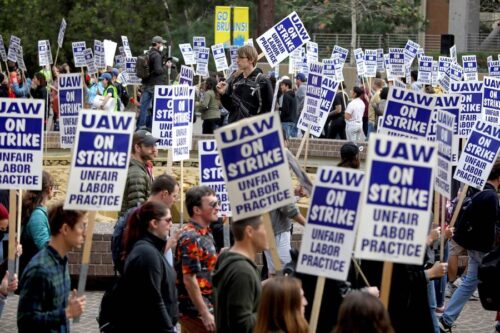 Jane McAlevey’s quote in the article states the case clearly:

Some advocates believe that focusing on building union power through worker organizing, rather than first seeking policy changes, holds the key to reversing the decline of union density.

Jane McAlevey, a senior policy fellow of with the Labor Center at the University of California, Berkeley, puts the problem with union strategy bluntly: ​“It’s a lack of ambition and it’s risk aversion, but fundamentally, it’s a lack of faith in workers.” McAlevey argues labor’s priority should be organizing that targets strategic sectors with hard-to-replace workforces.

“We’re relying on the Democrats and Congress to change labor law,” McAlevey says. ​“Come on! When we do that, it’s a cop-out and it’s an excuse. We’re not in control of that. How we run campaigns and how we negotiate contracts — that’s what we’re in control of.

“My life argument is: Let’s fix what we can fix and stop trying to fix everything else that we can’t fix.”

Back to Media Coverage